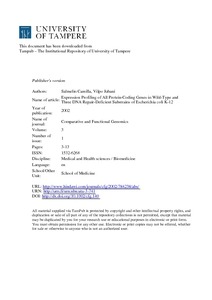 Gene chips or cDNA arrays of the entire set of Escherichia coli (E. coli) K12 genes were
used to measure the expression, at the mRNA level, of all 4290 protein-coding genes in
wild-type (WT) and three DNA repair-deficient derivative strains: (i) AB1157 (WT),
(ii) LR39 (ada, ogt), (iii) MV1932 (alkA1, tag-1) and (iv) GM5555 (mutS). The aim was
to investigate whether disruption of a single gene would result in significant deviation in
the expression of other genes in these organisms. We describe here a simple approach for a
stringent statistical evaluation of cDNA array data. This includes: (i) determination of
intra- and interassay variation coefficients for different expression levels, (ii) rejection of
biased duplicates, (iii) mathematical background determination, and (iv) comparison of
expression levels of identical copies of a gene. The results demonstrated a highly significant
correlation of gene expression when the mutants were individually compared with the wildtype.
Altogether, 81 deviations of the expression of 59 genes were noted, out of 12,870,
when 3-fold or greater up- or down-regulation was used as a criterion of differential
expression. In the light of current knowledge of E. coli biology, the differential expression
did not follow any logical pattern. In fact, the deviations may simply represent inter-assay
variation. The results obtained here with a simple model organism are different from those
obtained with most mammalian knockouts: disruption of the function of a single gene does
not, under good growth conditions, necessarily result in great changes in the expression of
other genes.