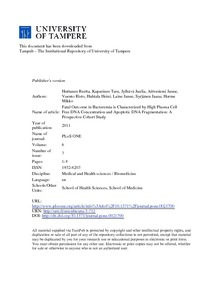 Recent studies have shown that apoptosis plays a critical role in the pathogenesis of sepsis. High plasma cell free DNA (cf-DNA) concentrations have been shown to be associated with sepsis outcome. The origin of cf-DNA is unclear.
Methods
Total plasma cf-DNA was quantified directly in plasma and the amplifiable cf-DNA assessed using quantitative PCR in 132 patients with bacteremia caused by Staphylococcus aureus, Streptococcus pneumoniae, ß-hemolytic streptococcae or Escherichia coli. The quality of cf-DNA was analyzed with a DNA Chip assay performed on 8 survivors and 8 nonsurvivors. Values were measured on days 1–4 after positive blood culture, on day 5–17 and on recovery.
Results
The maximum cf-DNA values on days 1–4 (n = 132) were markedly higher in nonsurvivors compared to survivors (2.03 vs 1.26 ug/ml, p<0.001) and the AUCROC in the prediction of case fatality was 0.81 (95% CI 0.69–0.94). cf-DNA at a cut-off level of 1.52 ug/ml showed 83% sensitivity and 79% specificity for fatal disease. High cf-DNA (>1.52 ug/ml) remained an independent risk factor for case fatality in a logistic regression model. Qualitative analysis of cf-DNA showed that cf-DNA displayed a predominating low-molecular-weight cf-DNA band (150–200 bp) in nonsurvivors, corresponding to the size of the apoptotic nucleosomal DNA. cf-DNA concentration showed a significant positive correlation with visually graded apoptotic band intensity (R = 0.822, p<0.001).
Conclusions
Plasma cf-DNA concentration proved to be a specific independent prognostic biomarker in bacteremia. cf-DNA displayed a predominating low-molecular-weight cf-DNA band in nonsurvivors corresponding to the size of apoptotic nucleosomal DNA.