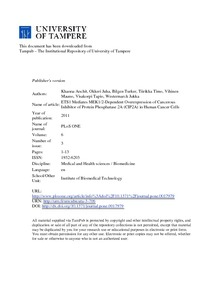 EGFR-MEK-ERK signaling pathway has an established role in promoting malignant growth and disease progression in human cancers. Therefore identification of transcriptional targets mediating the oncogenic effects of the EGFR-MEK-ERK pathway would be highly relevant. Cancerous inhibitor of protein phosphatase 2A (CIP2A) is a recently characterized human oncoprotein. CIP2A promotes malignant cell growth and is over expressed at high frequency (40–80%) in most of the human cancer types. However, the mechanisms inducing its expression in cancer still remain largely unexplored. Here we present systematic analysis of contribution of potential gene regulatory mechanisms for high CIP2A expression in cancer. Our data shows that evolutionary conserved CpG islands at the proximal CIP2A promoter are not methylated both in normal and cancer cells. Furthermore, sequencing of the active CIP2A promoter region from altogether seven normal and malignant cell types did not reveal any sequence alterations that would increase CIP2A expression specifically in cancer cells. However, treatment of cancer cells with various signaling pathway inhibitors revealed that CIP2A mRNA expression was sensitive to inhibition of EGFR activity as well as inhibition or activation of MEK-ERK pathway. Moreover, MEK1/2-specific siRNAs decreased CIP2A protein expression. Series of CIP2A promoter-luciferase constructs were created to identify proximal −27 to −107 promoter region responsible for MEK-dependent stimulation of CIP2A expression. Additional mutagenesis and chromatin immunoprecipitation experiments revealed ETS1 as the transcription factor mediating stimulation of CIP2A expression through EGFR-MEK pathway. Thus, ETS1 is probably mediating high CIP2A expression in human cancers with increased EGFR-MEK1/2-ERK pathway activity. These results also suggest that in addition to its established role in invasion and angiogenesis, ETS1 may support malignant cellular growth via regulation of CIP2A expression and protein phosphatase 2A inhibition.