Genetic Variants and Their Interactions in the Prediction of Increased Pre-Clinical Carotid Atherosclerosis: The Cardiovascular Risk in Young Finns Study 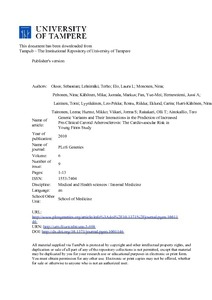 The relative contribution of genetic risk factors to the progression of subclinical atherosclerosis is poorly understood. It is likely that multiple variants are implicated in the development of atherosclerosis, but the subtle genotypic and phenotypic differences are beyond the reach of the conventional case-control designs and the statistical significance testing procedures being used in most association studies.

Our objective here was to investigate whether an alternative approach—in which common disorders are treated as quantitative phenotypes that are continuously distributed over a population—can reveal predictive insights into the early atherosclerosis, as assessed using ultrasound imaging-based quantitative measurement of carotid artery intima-media thickness (IMT). Using our population-based follow-up study of atherosclerosis precursors as a basis for sampling subjects with gradually increasing IMT levels, we searched for such subsets of genetic variants and their interactions that are the most predictive of the various risk classes, rather than using exclusively those variants meeting a stringent level of statistical significance.

The area under the receiver operating characteristic curve (AUC) was used to evaluate the predictive value of the variants, and cross-validation was used to assess how well the predictive models will generalize to other subsets of subjects. By means of our predictive modeling framework with machine learning-based SNP selection, we could improve the prediction of the extreme classes of atherosclerosis risk and progression over a 6-year period (average AUC 0.844 and 0.761), compared to that of using conventional cardiovascular risk factors alone (average AUC 0.741 and 0.629), or when combined with the statistically significant variants (average AUC 0.762 and 0.651). The predictive accuracy remained relatively high in an independent validation set of subjects (average decrease of 0.043).

These results demonstrate that the modeling framework can utilize the “gray zone” of genetic variation in the classification of subjects with different degrees of risk of developing atherosclerosis.