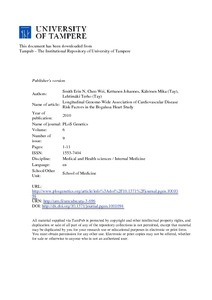 Cardiovascular disease (CVD) is the leading cause of death worldwide. Recent genome-wide association (GWA) studies have pinpointed many loci associated with CVD risk factors in adults. It is unclear, however, if these loci predict trait levels at all ages, if they are associated with how a trait develops over time, or if they could be used to screen individuals who are pre-symptomatic to provide the opportunity for preventive measures before disease onset.

We completed a genome-wide association study on participants in the longitudinal Bogalusa Heart Study (BHS) and have characterized the association between genetic factors and the development of CVD risk factors from childhood to adulthood. We report 7 genome-wide significant associations involving CVD risk factors, two of which have been previously reported. Top regions were tested for replication in the Young Finns Study (YF) and two associations strongly replicated: rs247616 in CETP with HDL levels (combined P = 9.7×10−24), and rs445925 at APOE with LDL levels (combined P = 8.7×10−19). We show that SNPs previously identified in adult cross-sectional studies tend to show age-independent effects in the BHS with effect sizes consistent with previous reports.

Previously identified variants were associated with adult trait levels above and beyond those seen in childhood; however, variants with time-dependent effects were also promising predictors. This is the first GWA study to evaluate the role of common genetic variants in the development of CVD risk factors in children as they advance through adulthood and highlights the utility of using longitudinal studies to identify genetic predictors of adult traits in children.