Cognitive Control in Auditory Working Memory Is Enhanced in Musicians 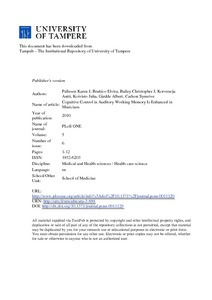 Musical competence may confer cognitive advantages that extend beyond processing of familiar musical sounds. Behavioural evidence indicates a general enhancement of both working memory and attention in musicians. It is possible that musicians, due to their training, are better able to maintain focus on task-relevant stimuli, a skill which is crucial to working memory. We measured the blood oxygenation-level dependent (BOLD) activation signal in musicians and non-musicians during working memory of musical sounds to determine the relation among performance, musical competence and generally enhanced cognition. All participants easily distinguished the stimuli. We tested the hypothesis that musicians nonetheless would perform better, and that differential brain activity would mainly be present in cortical areas involved in cognitive control such as the lateral prefrontal cortex.

The musicians performed better as reflected in reaction times and error rates. Musicians also had larger BOLD responses than non-musicians in neuronal networks that sustain attention and cognitive control, including regions of the lateral prefrontal cortex, lateral parietal cortex, insula, and putamen in the right hemisphere, and bilaterally in the posterior dorsal prefrontal cortex and anterior cingulate gyrus.