Gene Expression in a Drosophila Model of Mitochondrial Disease 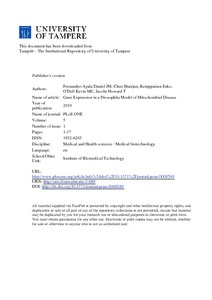 A point mutation in the Drosophila gene technical knockout (tko), encoding mitoribosomal protein S12, was previously shown to cause a phenotype of respiratory chain deficiency, developmental delay, and neurological abnormalities similar to those presented in many human mitochondrial disorders, as well as defective courtship behavior.

Here, we describe a transcriptome-wide analysis of gene expression in tko25t mutant flies that revealed systematic and compensatory changes in the expression of genes connected with metabolism, including up-regulation of lactate dehydrogenase and of many genes involved in the catabolism of fats and proteins, and various anaplerotic pathways. Gut-specific enzymes involved in the primary mobilization of dietary fats and proteins, as well as a number of transport functions, were also strongly up-regulated, consistent with the idea that oxidative phosphorylation OXPHOS dysfunction is perceived physiologically as a starvation for particular biomolecules. In addition, many stress-response genes were induced. Other changes may reflect a signature of developmental delay, notably a down-regulation of genes connected with reproduction, including gametogenesis, as well as courtship behavior in males; logically this represents a programmed response to a mitochondrially generated starvation signal. The underlying signalling pathway, if conserved, could influence many physiological processes in response to nutritional stress, although any such pathway involved remains unidentified.

These studies indicate that general and organ-specific metabolism is transformed in response to mitochondrial dysfunction, including digestive and absorptive functions, and give important clues as to how novel therapeutic strategies for mitochondrial disorders might be developed.