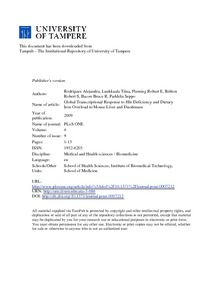 Iron is an essential trace element whose absorption is usually tightly regulated in the duodenum. HFE-related hereditary hemochromatosis (HH) is characterized by abnormally low expression of the iron-regulatory hormone, hepcidin, which results in increased iron absorption. The liver is crucial for iron homeostasis as it is the main production site of hepcidin.

The aim of this study was to explore and compare the genome-wide transcriptome response to Hfe deficiency and dietary iron overload in murine liver and duodenum. Illumina™ arrays containing over 47,000 probes were used to study global transcriptional changes. Quantitative RT-PCR (Q-RT-PCR) was used to validate the microarray results. In the liver, the expression of 151 genes was altered in Hfe−/− mice while dietary iron overload changed the expression of 218 genes. There were 173 and 108 differentially expressed genes in the duodenum of Hfe−/− mice and mice with dietary iron overload, respectively. There was 93.5% concordance between the results obtained by microarray analysis and Q-RT-PCR. Overexpression of genes for acute phase reactants in the liver and a strong induction of digestive enzyme genes in the duodenum were characteristic of the Hfe-deficient genotype.