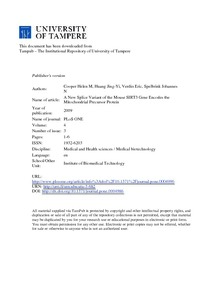 Mammals have seven NAD-dependent protein deacetylases. These proteins, called sirtuins, are homologous to yeast Sir2, and are emerging as important regulators of lifespan and intermediary metabolism. Three mammalian sirtuins, SIRT3-5 are mitochondrial. Sirtuins are highly conserved between species, yet mouse SIRT3 was reported to be markedly shorter than its human counterpart and to lack the N-terminal mitochondrial targeting signal present in the human protein.

We have isolated a novel mouse SIRT3 splice variant. This cDNA contains two translation initiation codons upstream of the originally reported start site. We show, using immunofluorescence and protein expression analysis that these longer variants are expressed and efficiently targeted to mitochondria, and that the processed forms of these longer variants are identical in size to the endogenous mouse SIRT3. We also show that the previously described form of SIRT3 is not mitochondrial.

Our observations point to a high level of conservation of SIRT3 as a mitochondrial protein in mice and human and indicate that several previous studies, which addressed mouse Sirt3 function, need to be re-evaluated.