Web-Based Virtual Microscopy for Parasitology: A Novel Tool for Education and Quality Assurance 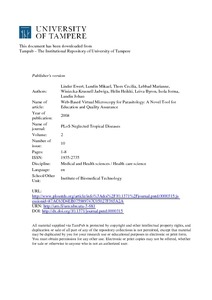 The basis for correctly assessing the burden of parasitic infections and the effects of interventions relies on a somewhat shaky foundation as long as we do not know how reliable the reported laboratory findings are. Thus virtual microscopy, successfully introduced as a histopathology tool, has been adapted for medical parasitology.

Specimens containing parasites in tissues, stools, and blood have been digitized and made accessible as a “webmicroscope for parasitology” (WMP) on the Internet (http://www.webmicroscope.net/parasitolog​y).These digitized specimens can be viewed (“navigated” both in the x-axis and the y-axis) at the desired magnification by an unrestricted number of individuals simultaneously. For virtual microscopy of specimens containing stool parasites, it was necessary to develop the technique further in order to enable navigation in the z plane (i.e., “focusing”). Specimens were therefore scanned and photographed in two or more focal planes. The resulting digitized specimens consist of stacks of laterally “stiched” individual images covering the entire area of the sample photographed at high magnification. The digitized image information (~10 GB uncompressed data per specimen) is accessible at data transfer speeds from 2 to 10 Mb/s via a network of five image servers located in different parts of Europe. Image streaming and rapid data transfer to an ordinary personal computer makes web-based virtual microscopy similar to conventional microscopy.

The potential of this novel technique in the field of medical parasitology to share identical parasitological specimens means that we can provide a “gold standard”, which can overcome several problems encountered in quality control of diagnostic parasitology. Thus, the WMP may have an impact on the reliability of data, which constitute the basis for our understanding of the vast problem of neglected tropical diseases. The WMP can be used also in the absence of a fast Internet communication. An ordinary PC, or even a laptop, may function as a local image server, e.g., in health centers in tropical endemic areas.