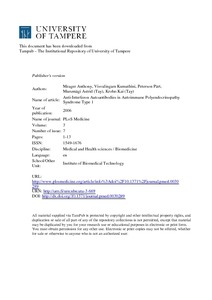 We tested for serum autoantibodies to type I IFNs and other immunoregulatory cytokines using specific binding and neutralisation assays. Unexpectedly, in 60/60 Finnish and 16/16 Norwegian APS1 patients with both AIRE alleles mutated, we found high titre neutralising immunoglobulin G autoantibodies to most IFN-α subtypes and especially IFN-ω (60% homologous to IFN-α)—mostly in the earliest samples. We found lower titres against IFN-β (30% homologous to IFN-α) in 23% of patients; two-thirds of these (from Finland only) also had low titres against the distantly related “type III IFN” (IFN-λ1; alias interleukin-29). However, autoantibodies to the unrelated type II IFN, IFN-γ, and other immunoregulatory cytokines, such as interleukin-10 and interleukin-12, were much rarer and did not neutralise.

Neutralising titres against type I IFNs averaged even higher in patients with APS1 than in patients with thymomas. Anti–type I IFN autoantibodies preceded overt candidiasis (and several of the autoimmune disorders) in the informative patients, and persisted for decades thereafter. They were undetectable in unaffected heterozygous relatives of APS1 probands (except for low titres against IFN-λ1), in APS2 patients, and in isolated cases of the endocrine diseases most typical of APS1, so they appear to be APS1-specific.

Looking for potentially autoimmunising cell types, we found numerous IFN-α+ antigen-presenting cells—plus strong evidence of local IFN secretion—in the normal thymic medulla (where AIRE expression is strongest), and also in normal germinal centres, where it could perpetuate these autoantibody responses once initiated. IFN-α2 and IFN-α8 transcripts were also more abundant in antigen-presenting cells cultured from an APS1 patient's blood than from age-matched healthy controls.

These apparently spontaneous autoantibody responses to IFNs, particularly IFN-α and IFN-ω, segregate like a recessive trait; their high “penetrance” is especially remarkable for such a variable condition. Their apparent restriction to APS1 patients implies practical value in the clinic, e.g., in diagnosing unusual or prodromal AIRE-mutant patients with only single components of APS1, and possibly in prognosis if they prove to predict its onset. These autoantibody responses also raise numerous questions, e.g., about the rarity of other infections in APS1. Moreover, there must also be clues to autoimmunising mechanisms/cell types in the hierarchy of preferences for IFN-ω, IFN-α8, IFN-α2, and IFN-β and IFN-λ1.