Validation of exposure assessment and assessment of recruitment methods for a prospective cohort study of mobile phone users (COSMOS) in Finland: a pilot study 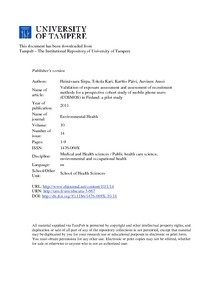 The aim of the study was to evaluate the agreement between self-reported and operator-derived estimates of call time based on a three-month monitoring period, as well as the consistency of mobile phone use over time. Alternative approaches to improve participation in a cohort study of mobile phone users were also compared.

A total of 5,400 subjects were identified from network operators' subscriber databases for recruitment to the pilot study. Operator and questionnaire data were used to quantify mobile phone use. Operator data were available for a subset of the subjects for a three-month period in three consecutive years. We also evaluated the effect of the length of the questionnaire and one- or two-phase recruitment on participation.

Operator data were available for 83% of the participants for 2007, the first study year. The agreement between self-reported and operator-derived call times decreased with the level of use among intermediate and heavy mobile phone users. During 2007-2009, mobile phone use increased fairly constantly over time.

The agreement between self-reported mobile phone use and operator databases was moderate and overestimation of the call time by participants was common. A prospective cohort study would be feasible in Finland, although the potentially low participation rate would increase the resources required for recruitment.