The contribution of psychological distress to socio-economic differences in cause-specific mortality: a population-based follow-up of 28 years 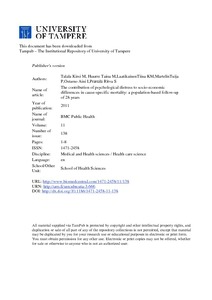 Psychological factors associated with low social status have been proposed as one possible explanation for the socio-economic gradient in health. The aim of this study is to explore whether different indicators of psychological distress contribute to socio-economic differences in cause-specific mortality.

The data source is a nationally representative, repeated cross-sectional survey, "Health Behaviour and Health among the Finnish Adult Population" (AVTK). The survey results were linked with socio-economic register data from Statistics Finland (from the years 1979-2002) and mortality follow-up data up to 2006 from the Finnish National Cause of Death Register. The data included 32451 men and 35420 women (response rate 73.5%). Self-reported measures of depression, insomnia and stress were used as indicators of psychological distress. Socio-economic factors included education, employment status and household income. Mortality data consisted of unnatural causes of death (suicide, accidents and violence, and alcohol-related mortality) and coronary heart disease (CHD) mortality. Adjusted hazard ratios were calculated using the Cox regression model.

In unnatural mortality, psychological distress accounted for some of the employment status (11-31%) and income level (4-16%) differences among both men and women, and for the differences related to the educational level (5-12%) among men; the educational level was associated statistically significantly with unnatural mortality only among men. Psychological distress had minor or no contribution to socio-economic differences in CHD mortality.