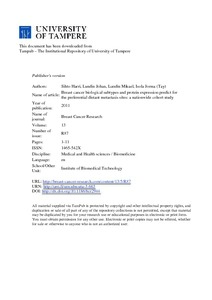 Some molecular subtypes of breast cancer have preferential sites of distant relapse. The protein expression pattern of the primary tumor may influence the first distant metastasis site.
Methods
We identified from the files of the Finnish Cancer Registry patients diagnosed with breast cancer in five geographical regions Finland in 1991-1992, reviewed the hospital case records, and collected primary tumor tissue. Out of the 2,032 cases identified, 234 developed distant metastases after a median follow-up time of 2.7 years and had the first metastatic site documented (a total of 321 sites). Primary tumor microarray (TMA) cores were analyzed for 17 proteins using immunohistochemistry and for erbB2 using chromogenic in situ hybridization, and their associations with the first metastasis site were examined. The cancers were classified into luminal A, luminal B, HER2+ enriched, basal-like or non-expressor subtypes.
Results
A total of 3,886 TMA cores were analyzed. Luminal A cancers had a propensity to give rise first to bone metastases, HER2-enriched cancers to liver and lung metastases, and basal type cancers to liver and brain metastases. Primary tumors that gave first rise to bone metastases expressed frequently estrogen receptor (ER) and SNAI1 (SNAIL) and rarely COX2 and HER2, tumors with first metastases in the liver expressed infrequently SNAI1, those with lung metastases expressed frequently the epidermal growth factor receptor (EGFR), cytokeratin-5 (CK5) and HER2, and infrequently progesterone receptor (PgR), tumors with early skin metastases expressed infrequently E-cadherin, and breast tumors with first metastases in the brain expressed nestin, prominin-1 and CK5 and infrequently ER and PgR.
Conclusions
Breast tumor biological subtypes have a tendency to give rise to first distant metastases at certain body sites. Several primary tumor proteins were associated with homing of breast cancer cells.