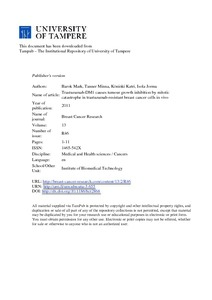 Trastuzumab is widely used for the treatment of HER2-positive breast cancer. Despite encouraging clinical results, a significant fraction of patients are, or become, refractory to the drug. To overcome this, trastuzumab-DM1 (T-DM1), a newer, more potent drug has been introduced. We tested the efficacy and mechanisms of action of T-DM1 in nine HER2-positive breast cancer cell lines in vitro and in vivo. The nine cell lines studied included UACC-893, MDA-453 and JIMT-1, which are resistant to both trastuzumab and lapatinib.
Methods
AlamarBlue cell-proliferation assay was used to determine the growth response of breast cancer cell lines to trastuzumab and T-DM1 in vitro. Trastuzumab- and T-DM1-mediated antibody-dependent cellular cytotoxicity (ADCC) was analysed by measuring the lactate dehydrogenase released from the cancer cells as a result of ADCC activity of peripheral blood mononuclear cells. Severe Combined Immunodeficient (SCID) mice were inoculated with trastuzumab-resistant JIMT-1 cells to investigate the tumour inhibitory effect of T-DM1 in vivo. The xenograft samples were investigated using histology and immunohistochemistry.
Results
T-DM1 was strongly growth inhibitory on all investigated HER2-positive breast cancer cell lines in vitro. T-DM1 also evoked antibody-dependent cellular cytotoxicity (ADCC) similar to that of trastuzumab. Outgrowth of JIMT-1 xenograft tumours in SCID mice was significantly inhibited by T-DM1. Histologically, the cellular response to T-DM1 consisted of apoptosis and mitotic catastrophe, the latter evidenced by an increased number of cells with aberrant mitotic figures and giant multinucleated cells.
Conclusions
Our results suggest mitotic catastrophe as a previously undescribed mechanism of action of T-DM1. T-DM1 was found effective even on breast cancer cell lines with moderate HER2 expression levels and cross-resistance to trastuzumab and lapatinib (MDA-453 and JIMT-1).