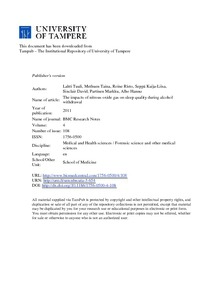 Poor quality of sleep among alcoholics and persons undergoing alcohol withdrawal has been described as a possible cause of alcohol relapse. It has been suggested earlier that nitrous oxide gas has a significant effect on the signs of alcohol withdrawal syndrome (AWS) and thus might be expected to reduce sleep disturbance during withdrawal. The aim of the present study was to investigate sleep quality during alcohol withdrawal, to evaluate the correlation between sleep quality and the severity of AWS and alcohol craving, and to determine if nitrous oxide treatment does counteract withdrawal's effects on the quality of sleep. Voluntary patients (n = 105) admitted to the A-Clinic detoxification center with AWS were included in the study. The AWS patients were randomly assigned to one of the following 45-minute gas treatments: (1) nitrous oxide/oxygen; (2) normal air/O2; and (3) medical (normal) air. The study was single-blind by design. Sleep quality was assessed after these treatments during the inpatient period; sleep time, sleep efficiency and the fragmentation of sleep were recorded by wrist-worn actigraphs. Severity of AWS was evaluated by the Clinical Institute Withdrawal Assessment of Alcohol Scale (CIWA-Ar) and that of alcohol dependence and craving by the Obsessive Compulsive Drinking Scale [OCDS] and the Severity of Alcohol Dependence Data (SADD) questionnaire.
Results
The fragmentation index and the time awake while in bed were both much above the reference values for the Finnish population. These values reflect the restless and disturbed night sleep of the subjects. The only statistically significant effects between the treatment groups were found in the correlations of CIWA-Ar (severity of AWS) scores, OCDS-scores (alcohol craving) and coffee consumption, all of which were positively associated with movement time and negatively with total sleep time and sleep efficiency. The sleep quality of patients treated with nitrous oxide gas did not differ from the sleep quality of those treated with normal air.
Conclusions
The severity of AWS and coffee consumption had the most significant negative impact on sleep quality. According to our results, nitrous oxide gas does not differ from placebo in its effect on sleep quality during alcohol withdrawal.