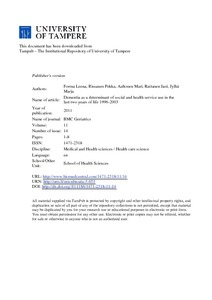 Dementia is one of the most common causes of death among old people in Finland and other countries with high life expectancies. Dementing illnesses are the most important disease group behind the need for long-term care and therefore place a considerable burden on the health and social care system. The aim of this study was to assess the effects of dementia and year of death (1998-2003) on health and social service use in the last two years of life among old people.

The data were derived from multiple national registers in Finland and comprise all those who died in 1998, 2002 or 2003 and 40% of those who died in 1999-2001 at the age of 70 or over (n = 145 944). We studied the use of hospitals, long-term care and home care in the last two years of life. Statistics were performed using binary logistic regression analyses and negative binomial regression analyses, adjusting for age, gender and comorbidity.

The proportion of study participants with a dementia diagnosis was 23.5%. People with dementia diagnosis used long-term care more often (OR 9.30, 95% CI 8.60, 10.06) but hospital (OR 0.33, 95% CI 0.31, 0.35) and home care (OR 0.50, 95% CI 0.46, 0.54) less often than people without dementia. The likelihood of using university hospital and long-term care increased during the eight-year study period, while the number of days spent in university and general hospital among the users decreased. Differences in service use between people with and without dementia decreased during the study period.