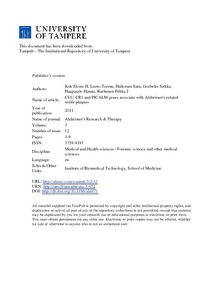 APOE is the strongest risk gene for sporadic Alzheimer's disease (AD) so far. Recent genome wide association studies found links for sporadic AD with CLU and CR1 involved in Aβ clearance, and PICALM affecting intracellular trafficking.
Methods
We investigated the associations of senile plaques (SP) and neurofibrillary tangles (NFT) with the proposed risk genes and APOE, in the Tampere Autopsy Study (TASTY) series (603 cases), a sample of the general population (0 to 97 yrs), who died out-of-hospital.
Results
Age and the APOEε4 allele associated strongly with all phenotypes of SP, as expected. In age and APOEε4 adjusted analyses, compared to the most common homozygous genotype, burnt out SP were more common among carriers of the C-allele of CLU, whereas the T-allele of PICALM and C-allele of CR1 were linked with lower SP coverage. We found no significant associations between any of the genetic variants and NFT.
Conclusions
Marginal effects from CLU, CR1 and PICALM suggest that these genes have minimal effects on the development of AD lesions.