Transfer of Health for All policy What, how and in which direction? A two-case study 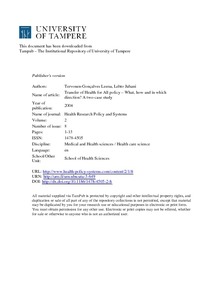 This article explores the transfer of World Health Organization's (WHO) policy initiative Health for All by the Year 2000 (HFA2000) into national contexts by using the changes in the public health policies of Finland and Portugal from the 1970's onward and the relationship of these changes to WHO policy development as test cases. Finland and Portugal were chosen to be compared as they represent different welfare state types and as the paradigmatic transition from the old to new public health is assumed to be related to the wider welfare state development.

The policy transfer approach is used as a conceptual tool to analyze the possible policy changes related to the adaptation of HFA into the national context. To be able to analyze not only the content but also the contextual conditions of policy transfer Kingdon's analytical framework of policy analysis is applied.

Our analysis suggests that no significant change of health promotion policy resulted from the launch of HFA program neither in Finland nor in Portugal. Instead the changes that occurred in both countries were of incremental nature, in accordance with the earlier policy choices, and the adaptation of HFA program was mainly applied to the areas where there were national traditions.