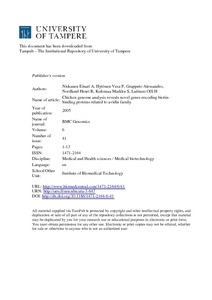 A chicken egg contains several biotin-binding proteins (BBPs), whose complete DNA and amino acid sequences are not known. In order to identify and characterise these genes and proteins we studied chicken cDNAs and genes available in the NCBI database and chicken genome database using the reported N-terminal amino acid sequences of chicken egg-yolk BBPs as search strings.

Two separate hits showing significant homology for these N-terminal sequences were discovered. For one of these hits, the chromosomal location in the immediate proximity of the avidin gene family was found. Both of these hits encode proteins having high sequence similarity with avidin suggesting that chicken BBPs are paralogous to avidin family. In particular, almost all residues corresponding to biotin binding in avidin are conserved in these putative BBP proteins. One of the found DNA sequences, however, seems to encode a carboxy-terminal extension not present in avidin.

We describe here the predicted properties of the putative BBP genes and proteins. Our present observations link BBP genes together with avidin gene family and shed more light on the genetic arrangement and variability of this family. In addition, comparative modelling revealed the potential structural elements important for the functional and structural properties of the putative BBP proteins.