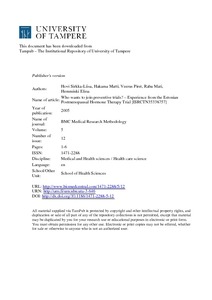 The interest of patients in participating in randomized clinical trials involving treatments has been widely studied, but there has been much less research on interest in preventive trials. The objective of this study was to find out how many women would be interested in a trial involving postmenopausal hormone therapy (PHT) and how the women's background characteristics and opinions correlated to their interest.

The data come from recruitment questionnaires (n = 2000) sent to women in Estonia in 1998. A random sample of women aged 45 to 64 was drawn from the Population Registry. The trial is a two-group randomized trial comparing estrogen-progestogen therapy with placebo or no drugs. A brief description of the study was attached to the questionnaires. Women were not told at this stage of the recruitment which group they would be assigned to, however, they were told of the chance to receive either hormone, placebo or no treatment.

Unlike the situation described in previous reports on preventive trials, in this case Estonian women interested in participating in a PHT trial were not healthier than other women. This suggests that trials involving PHT are more similar to treatment trials than to preventive trials. In a randomized controlled trial, more information should be obtained from those women who decline to participate.