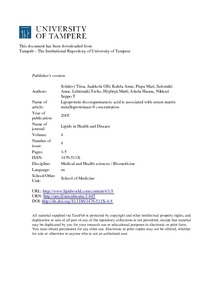 Lipids in Health and Disease 4
8

The subjects were divided into two groups: those with lower and those with higher than the median serum MMP-9 concentration. In all lipoprotein fractions, the mean percentage of docosapentaenoic acid (C22:5n-3) was higher in the group of subjects with higher MMP-9 level than in those with lower serum MMP-9 concentration (P < 0.01 for all). Likewise, the ratio of docosapentaenoic acid to arachidonic acid (C20:4n-6) was higher in the subjects with higher MMP-9 compared with the lower MMP-9 group (P < 0.001 for all).

So far, the evidence for an anti-inflammatory role of the n-3 PUFA has come from dietary interventions. Our results were obtained from a free-living population and indicate that there is a positive correlation between n-3 docosapentaenoic acid and MMP-9. What had triggered the rise in MMP-9 is not known, since serum level of MMP-9 is raised in many inflammatory conditions. These findings may indicate an increased biosynthesis of n-3 polyunsaturated fatty acids in subclinical inflammation.