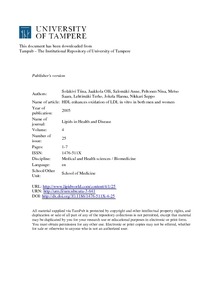 Lipids in Health and Disease 4
25

Oxidative modification of low-density lipoprotein (LDL) is a key event in the oxidation hypothesis of atherogenesis. Some in vitro experiments have previously suggested that high-density lipoprotein (HDL) co-incubated with LDL prevents Cu2+-induced oxidation of LDL, while some other studies have observed an opposite effect. To comprehensively clarify the role of HDL in this context, we isolated LDL, HDL2 and HDL3 from sera of 61 free-living individuals (33 women and 28 men).

When the isolated LDL was subjected to Cu2+-induced oxidation, both HDL2 and HDL3 particles increased the rate of appearance and the final concentration of conjugated dienes similarly in both genders. Oxidation rate was positively associated with polyunsaturated fatty acid content of the lipoproteins in that it was positively related to the content of linoleate and negatively related to oleate. More saturated fats thus protected the lipoproteins from damage.

We conclude that in vitro HDL does not protect LDL from oxidation, but is in fact oxidized fastest of all lipoproteins due to its fatty acid composition, which is oxidation promoting.