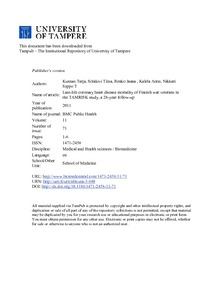 Wartime stress has been associated with increased late-life mortality of all causes of death. We evaluated whether wounded Finnish World War II veterans who were alive at the age of 55 have increased long-term coronary heart disease (CHD) mortality.

Health survey data were recorded in 1980 from 667 men, aged 55 years. Of them 102 had been wounded or injured in action during 1939-1945. The remaining participants served as the comparison group. The death certificates during a 28-year follow-up were obtained from the national statistics centre. Statistical comparisons were done by Cox proportional hazard regression model.

Physical trauma at young adulthood may extend to lifelong effects on health. This study suggests that being physically wounded or injured in war may lead to increased CHD mortality in late adulthood in a Finnish population.