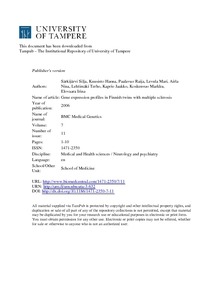 Since genetic alterations influencing susceptibility to multiple sclerosis (MS), the most common autoimmune demyelinating disease of the central nervous system (CNS), are as yet poorly understood, the purpose of this study was to identify genes responsible for MS by studying monozygotic (MZ) twin pairs discordant for MS.

In order to identify genes involved in MS development, the gene expression profiles in blood mononuclear cells obtained from eight MZ twin pairs discordant for MS were analyzed by cDNA microarray technology detecting the expression of 8 300 genes. The twins were collected from the Finnish Twin Cohort Study and both affected subjects and their healthy siblings underwent neurological evaluation and cerebral and spinal magnetic resonance imaging. Gene expressions were confirmed by relative quantitative reverse transcription PCR.

It appeared that 25 genes were at least two-fold up-regulated and 15 genes down-regulated in 25% (2/8) of twins with MS when compared to their healthy siblings. Moreover, 6/25 genes were up-regulated in 40% of MS twins and one gene, interferon alpha-inducible protein (clone IFI-6-16) (G1P3), in 50% of them. The six most constantly expressed genes are (1) G1P3, (2) POU domain, class 3, transcription factor 1, (3) myxovirus resistance 2, (4) lysosomal-associated multispanning membrane protein-5, (5) hemoglobin alpha 2 and (6) hemoglobin beta.

Over two-fold up-regulation of these six genes in almost half of MZ twins with MS suggests their role in MS pathogenesis. Studies using MZ MS twins obtained from genetically homogeneous population offer a unique opportunity to explore the genetic nature of MS.