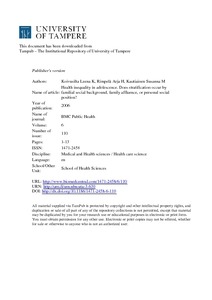 Two new sets of stratification indicators – family's material affluence and adolescent's personal social position- were compared with traditional indicators of familial social position based on parental occupation and education for their ability to detect health inequality among adolescents.

Survey data were collected in the Adolescent Health and Lifestyle Survey in 2003 from nationally representative samples of 12-, 14- and 16-year-old Finns (number of respondents 5394, response rate 71%). Indicators of the familial social position were father's socio-economic status, parents' education, parents' labour market position. Indicators of material affluence were number of cars, vacation travels, and computers in the family, own room and amount of weekly spending money. Adolescent's personal social position was measured as school performance. Measures of health were long-standing illness, overweight, use of mental health services, poor self-rated health and number of weekly health complaints. Ordinal logistic regression analysis was applied to study the associations between stratification indicators and health variables.

In addition to traditional indicators describing the socio-structural influences on the distribution of health among adolescents, indicators of family's material affluence should be further developed. Adolescents' personal social position should be included in the studies of health inequalities.