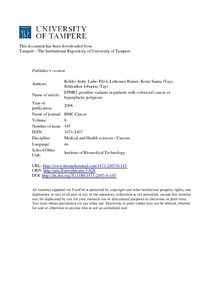 Ephrin receptor B2 (EPHB2) has recently been proposed as a novel tumor suppressor gene in colorectal cancer (CRC). Inactivation of the gene has been shown to correlate with progression of colorectal tumorigenesis, and somatic mutations have been reported in both colorectal and prostate tumors.

Here we have analyzed the EPHB2 gene for germline alterations in 101 individuals either with 1) CRC and a personal or family history of prostate cancer (PC), or 2) intestinal hyperplastic polyposis (HPP), a condition associated with malignant degeneration such as serrated adenoma and CRC.

Four previously unknown missense alterations were observed, which may be associated with the disease phenotype. Two of the changes, I361V and R568W, were identified in Finnish CRC patients, but not in over 300 Finnish familial CRC or PC patients or more than 200 population-matched healthy controls. The third change, D861N, was observed in a UK HPP patient, but not in additional 40 UK HPP patients or in 200 UK healthy controls. The fourth change R80H, originally identified in a Finnish CRC patient, was also found in 1/106 familial CRC patients and in 9/281 healthy controls and is likely to be a neutral polymorphism.

We detected novel germline EPHB2 alterations in patients with colorectal tumors. The results suggest a limited role for these EPHB2 variants in colon tumor predisposition. Further studies including functional analyses are needed to confirm this.