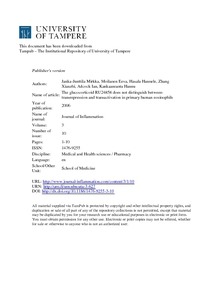 Glucocorticoids are used to treat chronic inflammatory diseases such as asthma. Induction of eosinophil apoptosis is considered to be one of the main mechanisms behind the anti-asthmatic effect of glucocorticoids. Glucocorticoid binding to its receptor (GR) can have a dual effect on gene transcription. Activated GR can activate transcription (transactivation), or by interacting with other transcription factors such as NF-κB suppress transcription (transrepression). RU24858 has been reported to transrepress but to have little or no transactivation capability in other cell types. The dissociated properties of RU24858 have not been previously studied in non-malignant human cells. As the eosinophils have a very short lifetime and many of the modern molecular biological methods cannot be used, a "dissociated steroid" would be a valuable tool to evaluate the mechanism of action of glucocorticoids in human eosinophils. The aim of this study was to elucidate the ability of RU24858 to activate and repress gene expression in human eosinophils in order to see whether it is a dissociated steroid in human eosinophils.

Human peripheral blood eosinophils were isolated under sterile conditions and cultured in the presence and/or absence RU24858. For comparison, dexamethasone and mometasone were used. We measured chemokine receptor-4 (CXCR4) and Annexin 1 expression by flow cytometry and cytokine production by ELISA. Apoptosis was measured by DNA fragmentation and confirmed by morphological analysis.

Our results suggest that in human eosinophils RU24858 acts as transactivator and transrepressor like classical glucocorticoids. Thus, RU24858 seems not to be a "dissociated steroid" in primary human eosinophils in contrast to that reported in animal cells. In addition, functionally RU24858 seems to be a less potent glucocorticoid as it did not reverse IL-5- and GM-CSF-afforded eosinophil survival similarly to dexamethasone and mometasone.