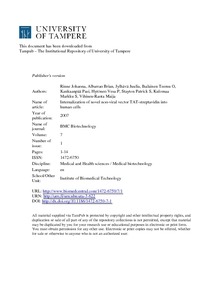 The cell-penetrating peptide derived from the Human immunodeficiency virus-1 transactivator protein Tat possesses the capacity to promote the effective uptake of various cargo molecules across the plasma membrane in vitro and in vivo. The objective of this study was to characterize the uptake and delivery mechanisms of a novel streptavidin fusion construct, TAT47–57-streptavidin (TAT-SA, 60 kD). SA represents a potentially useful TAT-fusion partner due to its ability to perform as a versatile intracellular delivery vector for a wide array of biotinylated molecules or cargoes.

By confocal and immunoelectron microscopy the majority of internalized TAT-SA was shown to accumulate in perinuclear vesicles in both cancer and non-cancer cell lines. The uptake studies in living cells with various fluorescent endocytic markers and inhibiting agents suggested that TAT-SA is internalized into cells efficiently, using both clathrin-mediated endocytosis and lipid-raft-mediated macropinocytosis. When endosomal release of TAT-SA was enhanced through the incorporation of a biotinylated, pH-responsive polymer poly(propylacrylic acid) (PPAA), nuclear localization of TAT-SA and TAT-SA bound to biotin was markedly improved. Additionally, no significant cytotoxicity was detected in the TAT-SA constructs.

This study demonstrates that TAT-SA-PPAA is a potential non-viral vector to be utilized in protein therapeutics to deliver biotinylated molecules both into cytoplasm and nucleus of human cells.