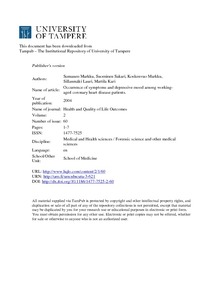 Health and Quality of Life Outcomes 2
60

The typical symptoms of coronary heart disease (CHD), chest pain and breathlessness, are well-known. They are considered quite dramatic, and can thus be fairly reliably mapped by a survey. However, people might have other clearly unpleasant symptoms impairing quality of life. The aim of this study is to evaluate the appearance of these complaints of working-aged people with self-reported CHD.

The study consists of a postal questionnaire of randomly selected Finns in age groups 30–34, 40–44 and 50–54, a response rate of 39% (N = 15,477). The subjects were asked whether or not a doctor had told them that they had angina pectoris or had had myocardial infarction. Four randomly selected age and sex matched controls were chosen for every patient. The occurrence of self-reported dyspnoea, chest pain during anger or other kind of emotion, palpitation and perspiration without physical exercise, irregular heartbeats, flushing, trembling of hands and voice, jerking of muscles, depression and day-time sleepiness were examined. Odds ratios (OR) with 95% confidence intervals (CI), between occurrence of symptoms and CHD with and without heart infarction, were computed by multivariate logistic regression analysis.

Working-aged people with self-reported coronary heart disease evince a number of symptoms limiting the quality of their every day life. This aspect should be paid attention to when evaluating functional capacity of these patients.