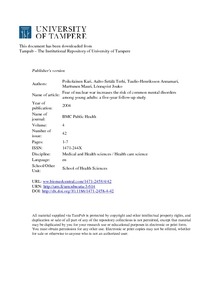 Evidence on the relation between fear of war and mental health is insufficient. We carried out a prospective cohort study to find out whether fear of nuclear war is related to increased risk of common mental disorders.

Within two months preceding the outbreak of Persian Gulf War in January 1991, 1518 adolescents [mean age 16.8 years, SD 0.9] filled in a self-administered questionnaire. Of the 1493 respondents, 47% gave their written informed consent to participate in the follow-up study. There were no material differences between those who chose to respond anonymously and those who volunteered to give their name and address for the follow-up study. In 1995, the response to the follow-up questionnaire was 92%. Common mental disorders were assessed by 36-item version of the General Health Questionnaire [GHQ]. A score 5 or higher was considered to indicate caseness. We excluded 23 cases which had used mental health services in the year 1991 or earlier and two cases with deficient responses to GHQ. This left 626 subjects for analysis [400 women].

After adjusting for significant mental health risk factors in logistic regression analysis, the risk for common mental disorders was found to be significantly related to the increasing frequency of fear for nuclear war, high scores of trait anxiety and high scores of immature defense style. Elevated risk was confined to the group reporting fear of nuclear war once a week or more often [odds ratio 2.05; 95% confidence interval 1.29–3.27].

Frequent fear of nuclear war in adolescents seems to be an indicator for an increased risk for common mental disorders and deserves serious attention.