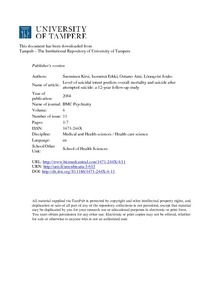 The aim of this study was to comprehensively examine clinical risk factors, including suicide intent and hopelessness, for suicide and risk of death from all causes after attempted suicide over a 12-year follow-up period.

A systematic sample of 224 patients from consecutive cases of attempted suicide referred to health care in four Finnish cities between 1 January and 31 July 1990 was interviewed.

Following attempted suicide, high intention to kill oneself is a significant risk factor for both death from all causes and suicide.