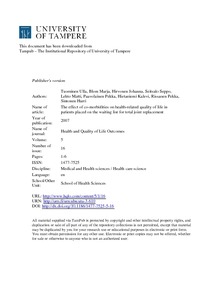 Health and Quality of Life Outcomes 5
16

Co-morbidity is a powerful predictor of health care outcomes and costs, as well as an important cofounder in epidemiologic studies. The effect of co-morbidities is generally related to mortality or complications. This study evaluated the association between co-morbidity and health-related quality of life (HRQoL) in patients awaiting total joint replacement.

A total of 893 patients were recruited to the study between August 2002 and November 2003 in four Finnish hospitals. The effect of co-morbidity on HRQoL was measured by the generic 15D instrument and by a Visual Analog Scale (VAS). Comparative variance analysis of socio-demographic and clinical characteristics was described by using either an independent samples t-test or the Chi-square test. The differences in each of the 15D dimensions and the overall 15D single index score for patients were calculated. Two-sided p-values were calculated with the Levene Test for Equality of Variances.

Assessing co-morbidity in patients placed on the waiting list for joint replacement may be useful method to prioritization in medical decision-making for healthcare delivery. The assessment of co-morbidities during waiting time is important as well as evaluating how the co-morbidity may affect the final outcomes of the total joint replacement.