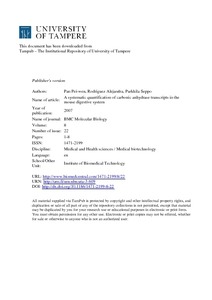 Carbonic anhydrases (CAs) are physiologically important enzymes which participate in many gastrointestinal processes such as acid and bicarbonate secretion and metabolic pathways including gluconeogenesis and ureagenesis. The genomic data suggests that there are thirteen enzymatically active members of the mammalian CA isozyme family. In the present study, we systematically examined the mRNA expression levels of all known CA isozymes by quantitative real-time PCR in eight tissues of the digestive system of male and female mice.

The CAs expressed in all tissues were Car5b, Car7, and Car15, among which Car5b showed moderate and Car7 and Car15 extremely low expression levels. Car3, Car12, Car13, and Car14 were detected in seven out of eight tissues and Car2 and Car4 were expressed in six tissues. Importantly, Car1, Car3, and Car13 showed very high expression levels in certain tissues as compared to the other CAs, suggesting that these low activity isozymes may also participate in physiological processes other than CA catalysis and high expression levels are required to fulfil their functions in the body.

A comprehensive mRNA expression profile of the 13 enzymatically active CAs in the murine gastrointestinal tract was produced in the present study. It contributes to a deeper understanding of the distribution of CA isozymes and their potential roles in the mouse digestive system.