Association between 5-HT2A, TPH1 and GNB3 genotypes and response to typical neuroleptics: a serotonergic approach 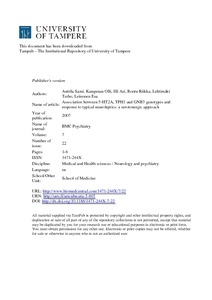 Schizophrenia is a common psychiatric disease affecting about 1% of population. One major problem in the treatment is finding the right the drug for the right patients. However, pharmacogenetic results in psychiatry can seldom be replicated.

More findings on the consequences of functional polymorphisms for the role of serotonin in the development of brain and serotonergic neurotransmission are needed before more detailed hypotheses regarding susceptibility and outcome in schizophrenia can be formulated. The present results may highlight some of the biological mechanisms in different courses of schizophrenia between men and women.