TGF-beta induces the expression of SAP30L, a novel nuclear protein 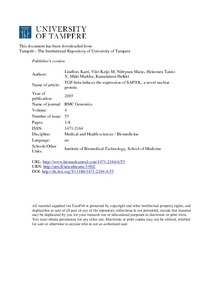 BackgroundWe have previously set up an in vitro mesenchymal-epithelial cell co-culture model which mimics the intestinal crypt villus axis biology in terms of epithelial cell differentiation. In this model the fibroblast-induced epithelial cell differentiation from secretory crypt cells to absorptive enterocytes is mediated via transforming growth factor-β (TGF-β), the major inhibitory regulator of epithelial cell proliferation known to induce differentiation in intestinal epithelial cells. The aim of this study was to identify novel genes whose products would play a role in this TGF-β-induced differentiation.ResultsDifferential display analysis resulted in the identification of a novel TGF-β upregulated mRNA species, the Sin3-associated protein 30-like, SAP30L. The mRNA is expressed in several human tissues and codes for a nuclear protein of 183 amino acids 70% identical with Sin3 associated protein 30 (SAP30). The predicted nuclear localization signal of SAP30L is sufficient for nuclear transport of the protein although mutating it does not completely remove SAP30L from the nuclei. In the nuclei SAP30L concentrates in small bodies which were shown by immunohistochemistry to colocalize with PML bodies only partially.Conclusions

By reason of its nuclear localization and close homology to SAP30 we believe that SAP30L might have a role in recruiting the Sin3-histone deacetylase complex to specific corepressor complexes in response to TGF-β, leading to the silencing of proliferation-driving genes in the differentiating intestinal epithelial cells