Emergency contraception among Finnish adolescents: awareness use and the effect of non-prescription status 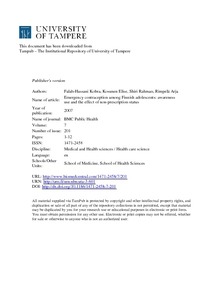 Adolescents need to be aware that there is a method of preventing pregnancy even after an unprotected intercourse. Limited information is available on the awareness of young adolescents and the effects of selling emergency contraception (EC) over-the-counter, and the findings are controversial. The aims of this study were to investigate awareness and use of EC among Finnish girls aged 12–18 years in 1999–2003, and to assess the effect of the 2002 non-prescription status on the use.

In 2001, nearly all 14–18-year-olds and a majority of 12-year-olds were aware of EC. Among 12–14-year-olds, a slight increase in awareness between 1999 and 2003 was observed but this was not related to non-prescription status. Health-compromising behavior (alcohol use, smoking), dating and having good school achievement were related to higher awareness of EC.

Nine percent of 14–18-year-olds had used EC once and 1% three times or more. No statistically significant change in EC use was found after non-prescription status. EC use increased with increasing alcohol consumption, particularly at age 14. Smoking, dating, and poor school achievement were related to increased use as well as not living in nuclear family. A lower use was observed if living in rural area or father's education was high. Mother's education was not related to use.

Adolescent girls were well aware of the existence of emergency contraception even before the non-prescription status. Over-the-counter selling did not increase the use.