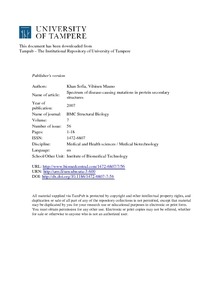 Most genetic disorders are linked to missense mutations as even minor changes in the size or properties of an amino acid can alter or prevent the function of the protein. Further, the effect of a mutation is also dependent on the sequence and structure context of the alteration.

Numerous trends in mutated and mutant amino acids are apparent. Among the original residues, arginine clearly has the highest relative mutability. The overall relative mutability among mutant residues is highest for cysteine and tryptophan. The mutability values are higher for mutated residues than for mutant residues. Arginine and glycine are among the most mutated residues in all secondary structures whereas the other amino acids have large variations in mutability between structure types. Statistical analysis was used to reveal trends in different secondary structural elements, residue types as well as for the charge and volume changes.