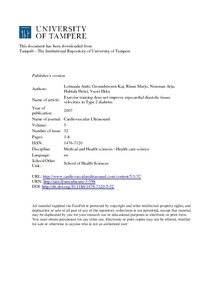 Exercise training improves endurance and muscle fitness in T2D, resulting in better glycemic control and reduced blood pressure. However, myocardial diastolic tissue velocities did not change significantly. Our data suggest that a much longer exercise intervention may be needed in order to reverse diastolic impairment in diabetics, if at all possible.