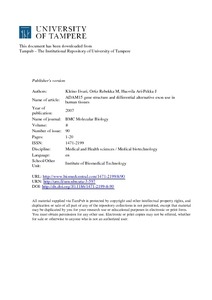 ADAM15 is a metalloprotease-disintegrin implicated in ectodomain shedding and cell adhesion. Aberrant ADAM15 expression has been associated with human cancer and other disorders. We have previously shown that the alternative splicing of ADAM15 transcripts is mis-regulated in cancer cells. To gain a better understanding of ADAM15 regulation, its genomic organization and regulatory elements as well as the alternative exon use in human tissues were characterized.

Human ADAM15, flanked by the FLJ32785/DCST1 and ephrin-A4 genes, spans 11.4 kb from the translation initiation codon to the polyadenylation signal, being the shortest multiple-exon ADAM gene. The gene contains 23 exons varying from 63 to 316 bp and 22 introns from 79 to 1283 bp. The gene appeared to have several transcription start sites and their location suggested the promoter location within a CpG island proximal to the translation start. Reporter expression experiments confirmed the location of functional GC-rich, TATAless and CAATless promoter, with the most critical transcription-supporting elements located -266 to -23 bp relative to the translation start. Normal human tissues showed different complex patterns of at least 13 different ADAM15 splice variants arising from the alternative use of the cytosolic-encoding exons 19, 20a/b, and 21a/b. The deduced ADAM15 protein isoforms have different combinations of cytosolic regulatory protein interaction motifs.

Characterization of human ADAM15 gene and identification of elements involved in the regulation of transcription and alternative splicing provide important clues for elucidation of physiological and pathological roles of ADAM15. The present results also show that the alternative exon use is a physiological post-transcriptional mechanism regulating ADAM15 expression in human tissues.