Cost-effectiveness analysis of guidelines for antihypertensive care in Finland 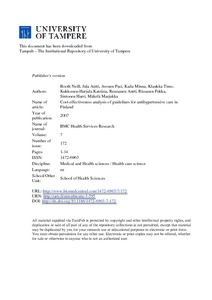 Hypertension is one of the major causes of disease burden affecting the Finnish population. Over the last decade, evidence-based care has emerged to complement other approaches to antihypertensive care, often without health economic assessment of its costs and effects. This study looks at the extent to which changes proposed by the 2002 Finnish evidence-based Current Care Guidelines concerning the prevention, diagnosis, and treatment of hypertension (the ACCG scenario) can be considered cost-effective when compared to modelled prior clinical practice (the PCP scenario).

A decision analytic model compares the ACCG and PCP scenarios using information synthesised from a set of national registers covering prescription drug reimbursements, morbidity, and mortality with data from two national surveys concerning health and functional capacity. Statistical methods are used to estimate model parameters from Finnish data. We model the potential impact of the different treatment strategies under the ACCG and PCP scenarios, such as lifestyle counselling and drug therapy, for subgroups stratified by age, gender, and blood pressure. The model provides estimates of the differences in major health-related outcomes in the form of life-years and costs as calculated from a 'public health care system' perspective. Cost-effectiveness analysis results are presented for subgroups and for the target population as a whole.