Effects of iron loading on muscle: genome-wide mRNA expression profiling in the mouse 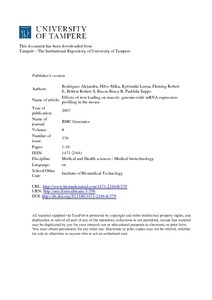 Hereditary hemochromatosis (HH) encompasses genetic disorders of iron overload characterized by deficient expression or function of the iron-regulatory hormone hepcidin. Mutations in 5 genes have been linked to this disease: HFE, TFR2 (encoding transferrin receptor 2), HAMP (encoding hepcidin), SLC40A1 (encoding ferroportin) and HJV (encoding hemojuvelin). Hepcidin inhibits iron export from cells into plasma. Hemojuvelin, an upstream regulator of hepcidin expression, is expressed in mice mainly in the heart and skeletal muscle. It has been suggested that soluble hemojuvelin shed by the muscle might reach the liver to influence hepcidin expression. Heart muscle is one of the target tissues affected by iron overload, with resultant cardiomyopathy in some HH patients. Therefore, we investigated the effect of iron overload on gene expression in skeletal muscle and heart using Illumina™ arrays containing over 47,000 probes. The most apparent changes in gene expression were confirmed using real-time RT-PCR.

Genes with up-regulated expression after iron overload in both skeletal and heart muscle included angiopoietin-like 4, pyruvate dehydrogenase kinase 4 and calgranulin A and B. The expression of transferrin receptor, heat shock protein 1B and DnaJ homolog B1 were down-regulated by iron in both muscle types. Two potential hepcidin regulatory genes, hemojuvelin and neogenin, showed no clear change in expression after iron overload.

Microarray analysis revealed iron-induced changes in the expression of several genes involved in the regulation of glucose and lipid metabolism, transcription and cellular stress responses. These may represent novel connections between iron overload and pathological manifestations of HH such as cardiomyopathy and diabetes.