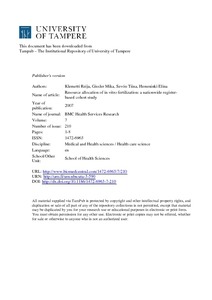 Infertility is common and in vitro fertilization (IVF) is a widely used treatment. In IVF the need increases and the effectiveness and appropriateness decrease by age. The purpose of this study was to describe allocation of resources for IVF by women's age, socioeconomic position, area of residence and treatment sector (public vs. private) and to discuss how fairly the IVF resources are allocated in Finland.

Women who received IVF between 1996 and 1998 (N = 9175) were identified from the reimbursement records of the Social Insurance Institution (SII). Information on IVF women's background characteristics came from the Central Population Register and the SII, on treatment costs from IVF clinics and the SII, and on births from the Medical Birth Register. The main outcome measures were success of IVF by number of cycles and treated women, expenditures per IVF cycles, per women, per live-birth, and per treatment sector, and private and public expenditures. Expenditures were estimated from health care visits and costs.

During a mean period of 1.5 years, older women (women aged 40 or older) received 1.4 times more IVF treatment cycles than younger women (women aged below 30). The success rate decreased by age: from 22 live births per 100 cycles among younger women to 6 per 100 among older women. The mean cost of a live birth increased by age: compared to younger women, costs per born live birth of older women were 3-fold. Calculated by population, public expenditure was allocated most to young women and women from the highest socioeconomic position. Regional differences were not remarkable.