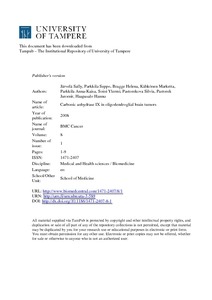 Carbonic anhydrase IX is a hypoxia-induced enzyme that has many biologically important functions, including its role in cell adhesion and invasion.

This study was set out to investigate the role of CA IX in a series of 86 oligodendroglial brain tumors (71 primary and 15 recurrent; 48 pure oligodendrogliomas and 40 mixed oligoastrocytomas).

CA IX was proved to be an independent prognostic indicator in oligodendroglial brain tumors, and it also correlates reversely with cell proliferation. It may have a role in the biology of oligodendrogliomas, and most interestingly, as it is mainly expressed in tumor tissue, CA IX could serve as a target molecule for anticancer treatments.