The calcium-binding protein S100P in normal and malignant human tissues 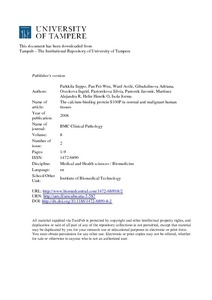 S100P is a Ca2+ binding protein overexpressed in a variety of cancers, and thus, has been considered a potential tumor biomarker. Very little has been studied about its normal expression and functions.

Among the normal tissues, the highest S100P mRNA levels were observed in the placenta and esophagus. Moderate signals were also detected in the stomach, duodenum, large intestine, prostate and leukocytes. At the protein level, the highest reactions for S100P were seen in the placenta and stomach. Immunostaining of tumor specimens showed that S100P protein is expressed in all the tumor categories included in the study, being most prevalent in gastric tumors.

Based on our observations, S100P is widely expressed in both normal and malignant tissues. The high expression in some tumors suggests that it may represent a potential target molecule for future diagnostic and therapeutic applications.