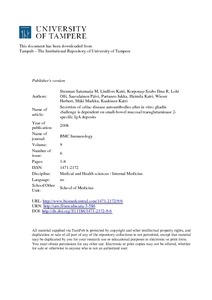 In celiac disease gluten, the disease-inducing toxic component in wheat, induces the secretion of autoantibodies which are targeted against transglutaminase 2 (TG2). These autoantibodies are produced in the small-intestinal mucosa, where they can be found deposited extracellularly below the epithelial basement membrane and around mucosal blood vessels. In addition, during gluten consumption these autoantibodies can also be detected in patients' serum but disappear from the circulation on a gluten-free diet. Interestingly, after adoption of a gluten-free diet the serum autoantibodies disappear from the circulation more rapidly than the small-intestinal mucosal autoantibody deposits. The toxicity of gluten and the secretion of the disease-specific autoantibodies have been widely studied in organ culture of small-intestinal biopsy samples, but results hitherto have been contradictory. Since the mucosal autoantibodies disappear slowly after a gluten-free diet, our aim was to establish whether autoantibody secretion to organ culture supernatants in treated celiac disease patient biopsies is related to the duration of the diet and further to the pre-existence of mucosal TG2-specific IgA deposits in the cultured biopsy samples.

In the organ culture system conducted with biopsies derived from treated celiac disease patients, gliadin induced secretion of autoantibodies to culture supernatants, reduced epithelial cell height and increased the density of lamina proprial CD25+ cells. However, these changes could be demonstrated only in biopsies from short-term treated celiac disease patients, where the small-intestinal mucosal TG2-specific IgA autoantibody deposits were still present. Furthermore, in these biopsies autoantibody secretion could be stimulated fully only after a 48-hour gliadin challenge.

Our results show that studies focusing on the toxic effects of gliadin in the organ culture system should be carried out with biopsy samples from short-term treated celiac disease patients who are likely still to have mucosal IgA deposits present. In addition to providing an explanation for the discrepancies in previous publications, the present study also enables further validation of the organ culture method.