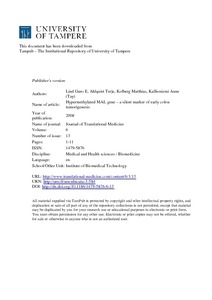 Tumor-derived aberrantly methylated DNA might serve as diagnostic biomarkers for cancer, but so far, few such markers have been identified. The aim of the present study was to investigate the potential of the MAL (T-cell differentiation protein) gene as an early epigenetic diagnostic marker for colorectal tumors.

Bisulphite sequencing revealed that the methylation was unequally distributed within the MAL promoter and by MSP analysis a region close to the transcription start point was shown to be hypermethylated in the majority of colorectal carcinomas (49/61, 80%) as well as in adenomas (45/63, 71%). In contrast, only a minority of the normal mucosa samples displayed hypermethylation (1/23, 4%). The hypermethylation of MAL was significantly associated with reduced or lost gene expression in in vitro models. Furthermore, removal of the methylation re-induced gene expression in colon cancer cell lines. Finally, MAL protein was expressed in epithelial cells of normal colon mucosa, but not in the malignant cells of the same type.

Promoter hypermethylation of MAL was present in the vast majority of benign and malignant colorectal tumors, and only rarely in normal mucosa, which makes it suitable as a diagnostic marker for early colorectal tumorigenesis.