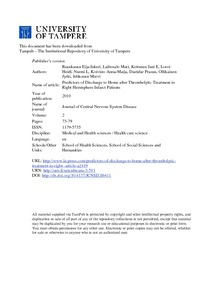 Background: The aim of the study was to assess the association between thrombolysis and length of hospital stay after right hemisphere (RH) infarct, and to identify which cognitive functions were predictive of discharge.

Methods: The study group consisted of 75 acute RH patients. Thirty-three patients had thrombolysis. Neuropsychological examinations were performed within 11 days of stroke onset. The cognitive predictors were visual neglect, visual memory, visual search and reasoning and visuoconstructive abilities. The outcome variable was time from stroke to discharge to home.

Conclusions: Thrombolytic treatment was a significant predictor of earlier discharge to home in patients with moderate/severe RH infarct, while cognitive functions had less predictive power.