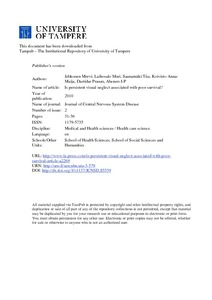 Background: The association of visual neglect with survival after right hemisphere (RH) stroke has received only limited attention.

Objective: This study explores the relationship of visual neglect and its spontaneous recovery to survival in a homogenous patient group with first-ever RH stroke.

Methods: Fifty-one RH stroke patients who suffered an infarct between 1994 and 1997 were retrospectively followed for survival until August 31, 2009. Acute-phase neurological, neuropsychological and neuroradiological data were studied to identify predictors of survival.