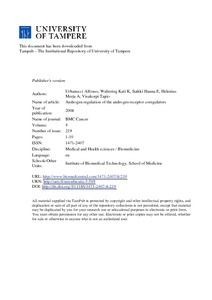 The critical role of the androgen receptor (AR) in the development of prostate cancer is well recognized. The transcriptional activity of AR is partly regulated by coregulatory proteins. It has been suggested that these coregulators could also be important in the progression of prostate cancer. The aim of this study was to identify coregulators whose expression is regulated by either the androgens and/or by the expression level of AR.

In conclusion, we identified 5 coactivators whose expression was induced by androgens suggesting that they could potentiate AR signaling. Overexpression of AR seems to sensitize cells for low levels of androgens.